The 21-year-old volunteer from SAKA, a group of artists defending farmers’ rights, then saw authorities interrogate her 92 comrades arrested at the police station one day before the 34th anniversary of the Global Land Reform Program (CARP).

“We have been dehumanized,” Erin said. “One of my friends had an asthma attack, but the cops ignored him and kept recording us asking questions about where we came from and what we were doing in Tarlac. When they asked me what I was doing there, I said, “I came to paint,” she told Rappler in a mixture of Filipino and English.

Collapsed on the hot sidewalk of the police station parking lot, and hovering between fear and anger, Erin dug deep to regain her composure.

There was only one way he could find comfort. Erin pulled out her brushes and paper pads.

The resilience of young people

He spotted Marcelo, an 11-year-old boy whose parents were also arrested by the police. She began painting the boy’s portrait, remembering how they shared jokes on the farm during the tillage.

When they started chatting, Erin winced at the memory of the boy crying during the arrests, but marveled at how quickly he recovered.

“I was blown away by how cheerful he looked. He was so happy. I thought that even if we had pictures, he still liked having his portrait done, “he said.

For Erin, the portrait of Marcelo was also a symbol of youthful solidarity and resilience.

While painting, she thought about her journey as an artist, having started drawing when she was six, and her plan to pursue Fine Arts at the University of the Philippines and also become a writer.

Erin tried to paint another portrait but was interrupted by their transfer to a prison cell.

They were asked to line up and start counting themselves. The officer in charge told them they were lucky to still have respect and peace.

Behind Erin’s back, her hands clenched into fists. But she managed to yell: “Four”.

The officer in charge wondered aloud how many of them could enter the women’s holding cell which already had four other occupants, he told Rappler.

When they entered the cell, some comrades started crying in disbelief and indignation.

“My pride was the only thing left. I didn’t let myself cry until the end, kasi kung umiyak ako or mag break down, I thought, panalo na sila. ” (I thought crying or breaking down would mean they would win.)

He started hugging those in tears.

“I was hoping it was enough,” he sighed.

Writing on paper torn from a box of chocolates was their form of communication with friends and family waiting outside.

The heat in the cell was almost unbearable, Erin said. Some comrades fainted and were taken outside to recover.

Erin resumed drawing. But suffering from cigarette smoke, lack of food and verbal intimidation from the police, she the artist found herself punching the cell wall.

“I know we didn’t do anything to deserve that treatment,” he said. “We were crammed like sardines, squashed to the floor as we tried to sleep in shifts, and some had to sit all night.”

Erin kept awake the first night after hearing their release papers would arrive at 8am.

But that didn’t happen. He said they were asked to re-sign a new affidavit on the floor, with misspelled names as a reason. He thought it was just a tactic to delay their release.

As she continued to paint, Erin thought about the events that had led to her arrest.

They had prepared a program to commemorate the signing of the CARP and highlight how many farmers have been deprived of the land they have cultivated. They worked on the land to show solidarity and presented cultural numbers and statements of support to the 236 beneficiaries of the land reform of the 200 hectares of land of Hacienda Tinang.

One of those arrested, Unyon ng writer / artist and volunteer Mga Manggagawa sa Agrikultura (UMA) Angelo Suarez, told Rappler that police have reneged on a negotiated deal with activists to stop the bungkalan (plowing) but continues with the solidarity program.

They started arresting the assembly of farmers, lawyers, journalists and artists and some minors and later filed slander complaints and illegal assembly complaints against 83 of them, including Erin, who had to wait to pay their bail on June 12. .

Even then, police tried to dismiss the court’s release order, lawyer Jobert Pahilga of the National People’s Lawyers Union said. 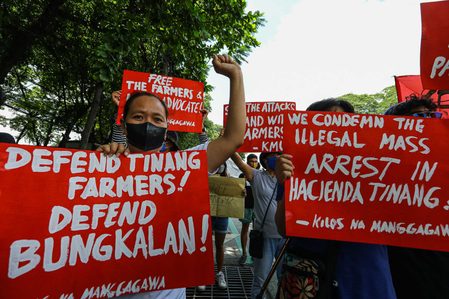 Erin ended her three-day detention by hugging other inmates. She told Rappler that even though she knew they had done nothing wrong, she had to fight a sense of disgrace and dismay at finding herself in prison.

However, he added, what won was dignity and hope, even as he continues to understand why farmers continue to suffer and face oppression three decades after the signing of the historic CARP law.

Erin has now returned home to Marikina with her cats, trying to paint more from memory as she awaits the June 29 indictment of three new lawsuits filed against Tinang 93. The DAR, meanwhile, has reaffirmed the farmers of Tinang as the legitimate owners of 200 hectares of estate.