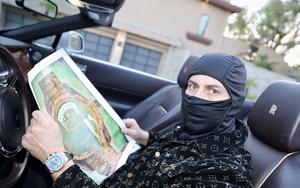 MIAMI BEACH, FL, June 22, 2022 / 24-7Press Release / – With the ability to combine genres and create a fusion of color and emotion, artist MorEnvyOne has been on this journey for most of her life. With his art now featured in 5-star hotels and Michelin-starred restaurants around the world, he started doing street graffiti and getting into trouble in the San Francisco Bay Area. Teenage recklessness, coupled with a serious passion for art, has now led to a new aesthetic that combines contemporary art with a street-style / graffiti aesthetic to create distinctive and noteworthy pieces.

A spokesperson for the artist released an official statement to the press: “MorEnvyOne creates a truly one-of-a-kind fusion of genres. With some of its pieces inspired by Andy Warhol’s pop-art aesthetic, MorEnvyOne also draws on surrealist references and inspiration. of artists like Salvador Dali. With today’s fast-paced world where even major fashion houses are adapting to street style, artists like MorEnvyOne are on the verge of a new art movement in which contemporary art is beginning to lose its place. his seriousness and is now taking on a more raw, colorful and energetic aesthetic like street art and graffiti ”.

The artist is now fully ready to make his NFT debut after much success through traditional means. With his art focusing on modernity and innovation, it is only natural for MorEnvyOne to step into the NFT game and make his mark in the realm of the blockchain. Being completely self-taught, his journey took him through many twists. After much trial and error, he has fine-tuned his aesthetic and the message he wants to convey with his art. Often using cartoon characters as subjects for his portraits, he infuses his art with a sense of nostalgia and joy, while using bold and edgy street aesthetics to create a unique juxtaposition of images and feelings.

MorEnvyOne currently resides in Las Vegas, Nevada and his art is currently featured in luxury penthouses and Michelin-starred restaurants in San Francisco, Miami, Monaco, Dubai and more. He has also created commissioned artwork for many renowned Las Vegas venues and clubs. He continues to grow his presence around the world and aims to create ever more exclusive pieces for world-famous hotels, restaurants and clubs.

More details about MorEnvyOne can be seen on its social media pages, its TikTok page and its NFT platforms.