House price growth stagnates. What does it mean to be in line with the credit limit outlook?

Today brings the release of June home price indices from both the FHFA (the regulator that oversees Fannie and Freddie, the entities that guarantee most mortgages in the US) and the S&P Case Shiller. These are two widely followed measures of home prices, and the FHFA’s data is particularly important because it determines changes in the corresponding loan limits.

Both indices declined in June, but both remained at historically high year-over-year levels. 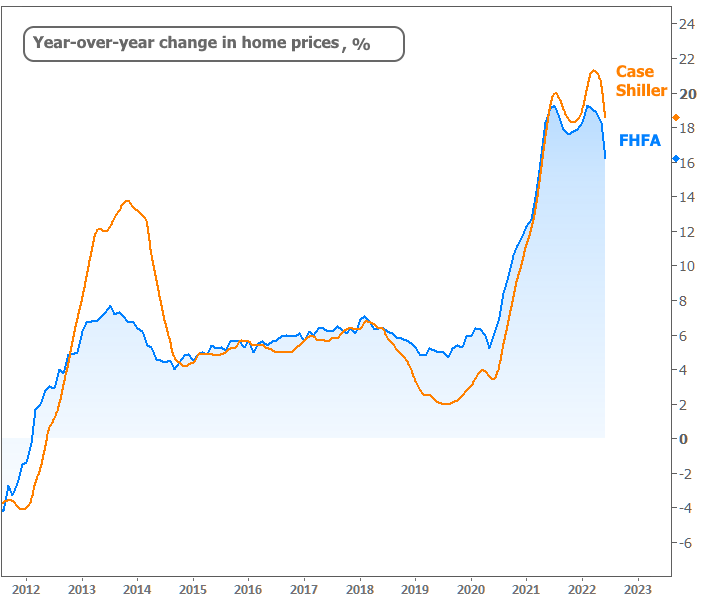 For a curious look at how the recent rise in prices stacks up with the mortgage meltdown and the housing boom that preceded the financial crisis, you can go to: 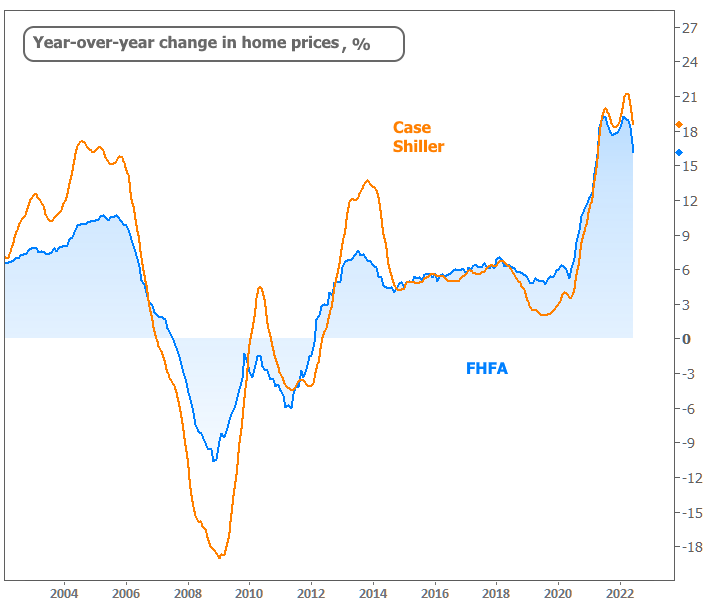 Year-over-year numbers certainly don’t tell the story of recent changes in prices. The next chart shows the month-over-month changes, with the latest update for June dropping to 0.1% for the FHFA (vs. 1.3% in May) and 0.4% for the Case Shiller (vs. 1.2% in May). 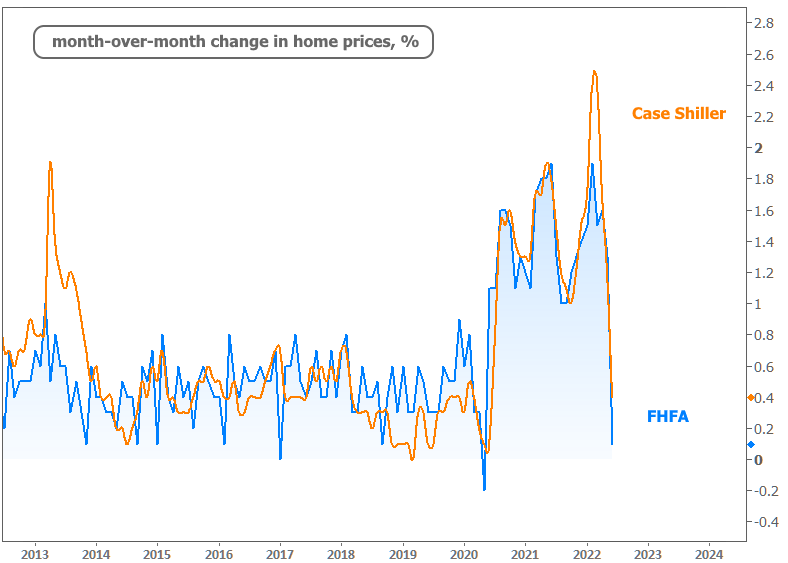 Again, it’s June, and there are still 2 months of housing market activity since then. While other, more timely house price measurements suggest a continuation of the trend, the following comments from Black Knight are particularly interesting:

“The median home price fell 0.77% in July, the largest single-month decline since January 2011. On a seasonally adjusted basis, July’s decline ranks among the 10 largest monthly declines on record going back 30 years.” – Black Knight

Whether a similar decline appears in the FHFA/Case-Shiller data remains to be seen. Perhaps more important is what happens next. It was not an unpopular opinion that house prices rose too fast in 2020 and 2021. A quick return to near-zero price growth in June was necessary, and perhaps even “welcome,” depending on who you ask.

The price path over the next 3 months has two options.

Option 1: Buyers are waiting in the wings and want to level the prices (some visible effects can be seen in the form of list price reduction). In this case, prices will not necessarily decrease on a seasonally adjusted basis and year-on-year growth will remain above 10%. It is a strong choice for home prices.

Option 2: Buyers wait for prices to return to a more affordable range, closer to levels seen in the first quarter of the year. This leads to a more historically normal year-over-year improvement in the 3rd quarter and several months of prices moving slightly lower.

These options are offered without any probabilities attached, to completely lay the playing field for the coming months. There are some other options (such as prices moving back, or falling at an even faster pace), but we attach some probabilities and say experts don’t see those extremes being the same as the options above.

Why do we care so much about the next 3 months? To be fair, it’s the house price data for July, August and September that we really focus on. For the next 3 months that data will be reflected in the official indices. We are concerned because that quarter’s data will determine the increase in debt limits corresponding to 2023.

Notably, the data that feeds the loan limit calculation differs slightly from the FHFA’s headline price index. While the annual change in prices was 16.2% at the headline level (depicted in the first 2 charts above), the “extended quarterly” data series used for the corresponding debt ceiling was over 17% over the same period. It made a significantly better improvement in Q2, with the headline index up 3% from March, or 4.6% from the January-March average, compared to about 6% versus Q1.

In other words, the data that provides the loan limit calc is a little friendlier than the monthly price index. Why is it different? In the FHFA’s own words, the quarterly expanded data “FHA-backed mortgage transactions and sales price information obtained from county recorder offices (with sales prices below the annual loan limit ceiling).” This gives a slightly higher weight to low-priced homes and underprices compared to FHA’s monthly index. Homes are more insulated from price declines (or the other way around). As seen, lower-priced homes are more likely to continue appreciating in the first half of 2022 as affordability deteriorates sharply).