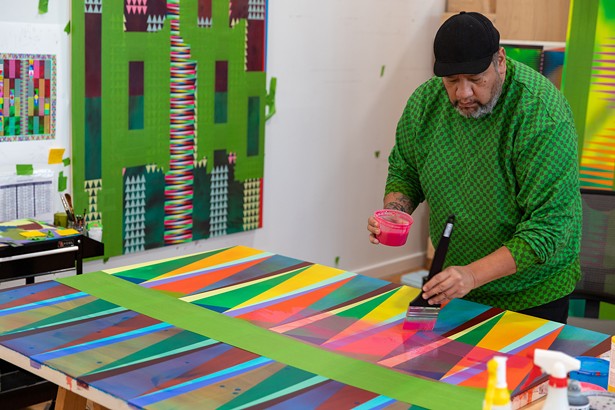 His unique creative style embraces a range of expressive mediums, such as fabrics, embroidery, weaving, hand-stitched fringes, beads and other materials that are the basis for his vibrant paintings, sculptures, garments and large-scale assemblages. installations. Gibson’s work often recontextualizes and then reconsiders traditional Native American craftsmanship within a contemporary cultural framework, resulting in a body of work that is both conscious and celebratory. He regularly exhibits his art at major world institutions and his work is represented in numerous museums and private collections. I spoke to Gibson about Zoom earlier this year. This is a modified version of that conversation. 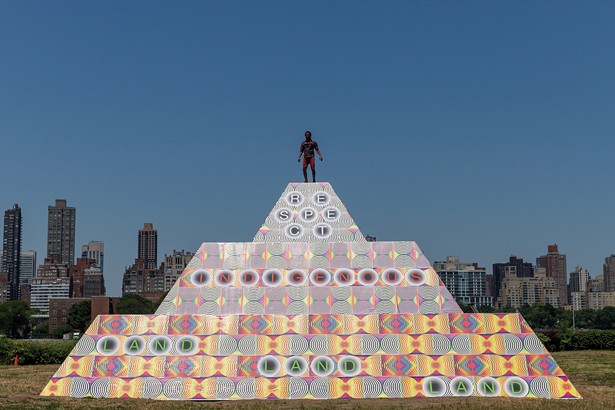 I originally came to Columbia County in 2007 for a residency at Art Omi. We moved here in the summer [of 2012]. And then the studio started to grow and then I bought this building I’m in now, which is a turn-of-the-century school in Claverack.

At that time in my life I was 40, so the goal was to take root and do some life editing and secure the things we knew we wanted to do: my artistic career, [my husband] Runey’s artistic practice is a family. 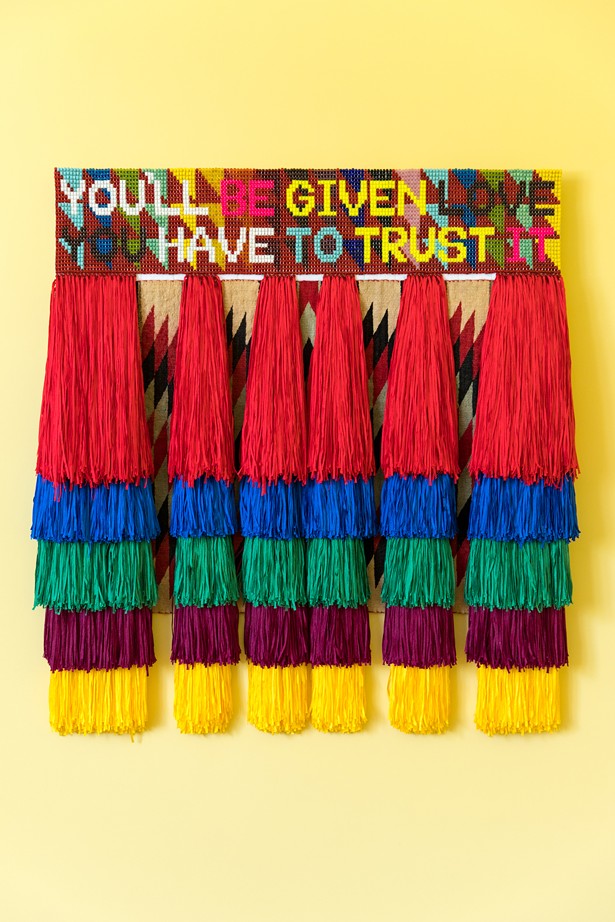 TT: Your celebration of indigenous Native American culture through your art articulates a vibrant spectrum. How is that spectrum changing?

JG: I think my shift in viewing an audience of indigenous Native American contemporary art and culture is something that I know is always at the forefront of my brain now and I can feel where it is developing. I think when you are a native, you are somehow held accountable by your family, your community, other people, whether they are part of your tribal nation or not.

Nobody is talking to the indigenous public about that world of contemporary art, and so for me it became something that interested me. Maybe not even as a curiosity, just a kind of “What does it mean to speak to other indigenous artists?” So, I have to assume that to some extent we are people who, regardless of what our relationship with our community is, or how traditional or not traditional it is, we have all chosen to make art and spread it to the global world.

This increased the spectrum a lot [and] Rather than broaden myself, I find the people I inspire with and then ask them to come together and be able to do the best of what I do, and set it up as a platform for them to do the best they can do. 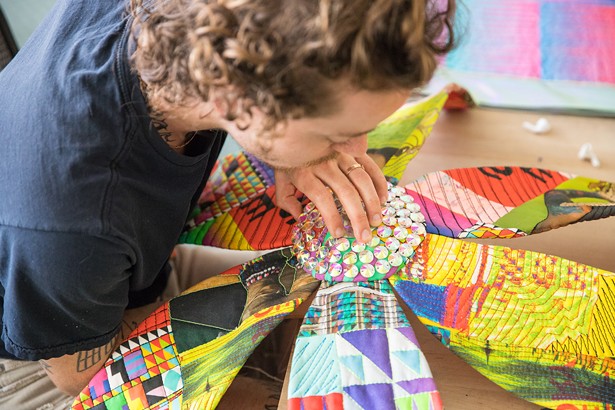 TT: You said you almost stopped making your art. Please share any thoughts on this inner quest as an artist.

JG: That really goes back, really from the time we moved to New York. Runey and I moved together from London in 1999.

I was exhibiting and I think commercial success was really important to me because it was a kind of barrier to break. I was quite determined to be a part of that part of the art world as well and not just stay in non-profit spaces that talked about bigger problems. I’ve been trying to juggle a lot all these years.

I guess it was somewhere around 2008, that’s the point for me. A couple of times, I thought about leaving. I think I also expected, growing up, that the art world was meritocracy. I thought it was totally inclusive, I thought it was completely homosexual. So, getting there and running into some kind of heteronormative, kind of machismo, class issues and racial issues, was really daunting. I couldn’t find the reason big enough to want to bear it. 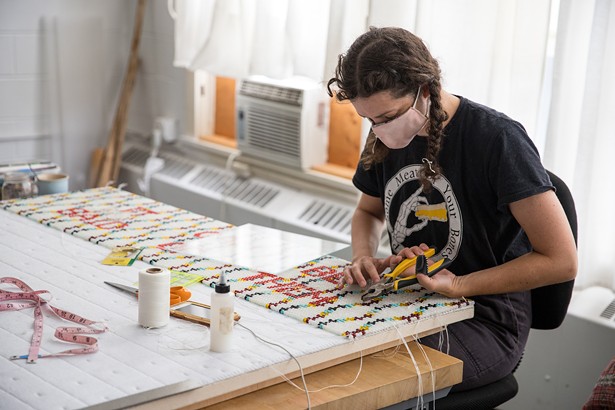 And, at the same time, I’m having these conversations with academics, scholars focused on indigenous production, indigenous historical creation. That conversation, for me, is so important and so broad, so entering the art world, where no one was aware of it, feels like walking off a cliff.

He was deciding: I’m worried he’s stereotyped, I identify as a Native American. “Am I pigeonholing myself?” is the question that has arisen several times.

I had to turn off all those voices long enough for the job to work to see, how does it feel to do it, to learn how to work with beads? I had learned a few beads in my teens and early 20s, but actually applying it in any substantive way didn’t happen until about 2008-2011.

That was the first time I felt the city I always wanted to be an artist in, New York City, finally noticed me and paid attention. This was the big change. 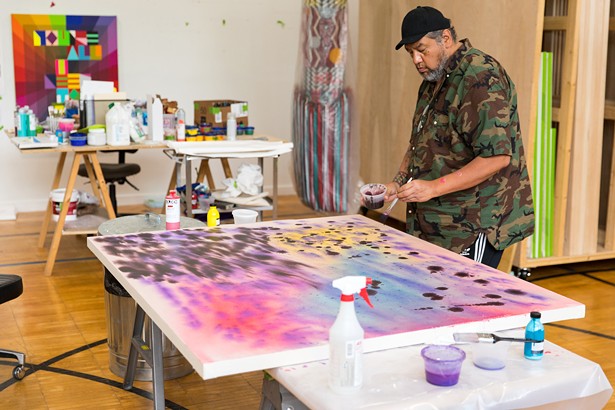 TT: Your art is powerful, empowered and empowering all at once, it does all of that. How is power defined in art?

JG: Oh, this is a great question. Power in art: I think there are many different types of power, right?

And so, I think about the garments I make, the power that comes with it … I think that when someone wears them, which is a huge part of them, someone has to wear them, be it me or someone else … those individuals that I wear in leaders, their personal narratives intertwine with my personal narrative and leave an archive that is powerful, which is the present time, which will describe to me, of course, but also what was happening in the spaces in which I moved.

I think there are other kinds of power, of course, but I think for me there is a genuine belief in animating materials and putting a space together. 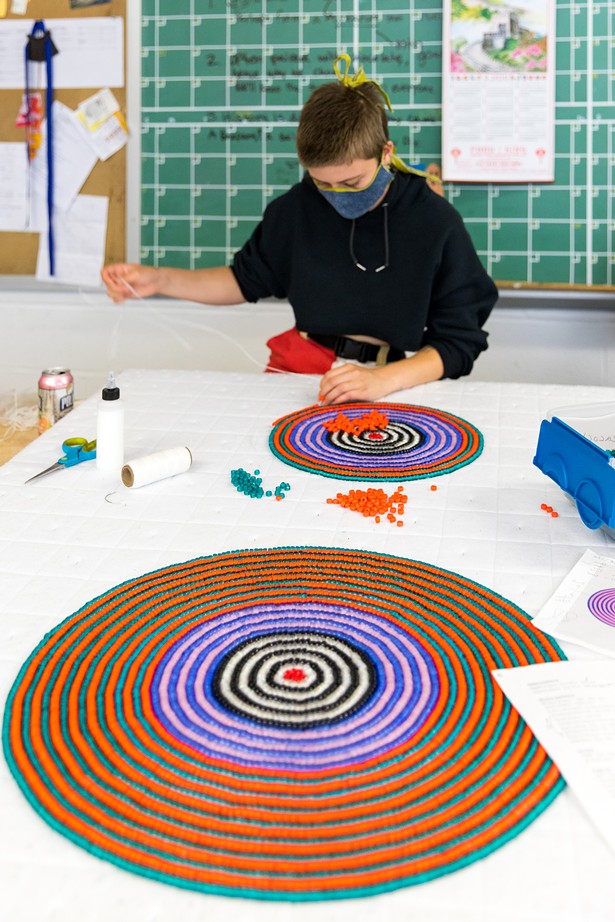 TT: Your exhibitions are a collaboration of ritual objects, costumes, paintings, installations, dances, music and performances. How does this fit together for you?

JG: I remember the days when I did everything, right?

To do enough to make an exhibition, to fill a museum space, that’s where the team happened. I think a lot of the artisans I’ve talked to and the people who are really into the craft, it’s therapeutic. That kind of repetition, I think it heals you. It occupies a certain place and also has the ability to heal you. And I feel like all the beads I’ve done, all the sewing I’ve done, have done it.

This is not something we do in our lives. We are the tiniest parts of a billion transactions happening every day and I think it makes us feel fragmented. Echoes every symptom of schizophrenia. The craftsmanship and the kind of long process of making something is very healing to me, and now that process includes other people, it includes communication, it includes experimentation. My moment of realization, at this point, really happens when I see the installed work and see how people interact with it, that’s when I get the rush. 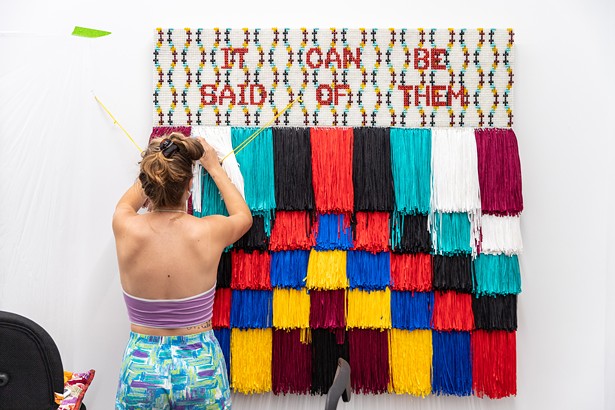 TT: The idea of ​​futurism seems to be an expanding idea in the art world. Do you have any ideas about futurism with respect to your work?

JG: I started talking about futurism a long time ago. I think I started talking about it, about the need to be present. We can’t start thinking about a future unless we can feel really grounded in the present, so this is where I’ve been thinking a lot about the materials and the kind of extraordinary you can do in pretty simple ways, you know, in color – that kind of thing. , things that can bring you back to being in one place.

So, looking into the future is actually quite scary because if you have clarity in the present, you see these kinds of seemingly insurmountable challenges ahead of us, mostly ecological. People who know me, I talk a lot about fear and anger. Of course, people are afraid and, of course, they are angry. But we cannot solve these problems with fear and anger. 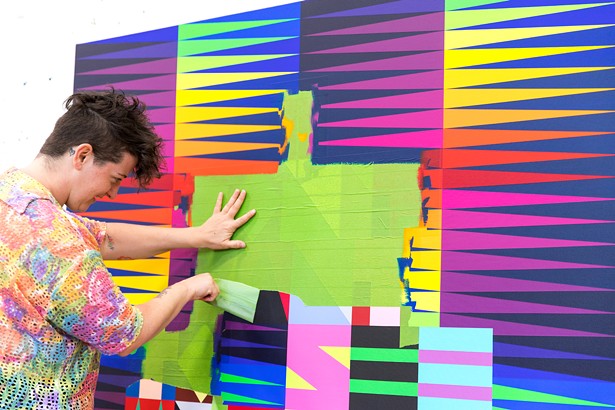 TT: What advice do you have for this younger generation of artists who stand up and grapple with all these same problems?

JG: I worked with a professor from the School of the Art Institute of Chicago named Maureen Sherlock, [and] the assumption I received from her that I still care about is: your opportunity to have freedom exists between well-traced and marked spaces. It’s before things form, and boundaries are set, and rules, and perceptions are set, that things start to get a little tighter, cramped, and stuffy. If you can find a space in between, you can define it, you can be whatever you want to be. 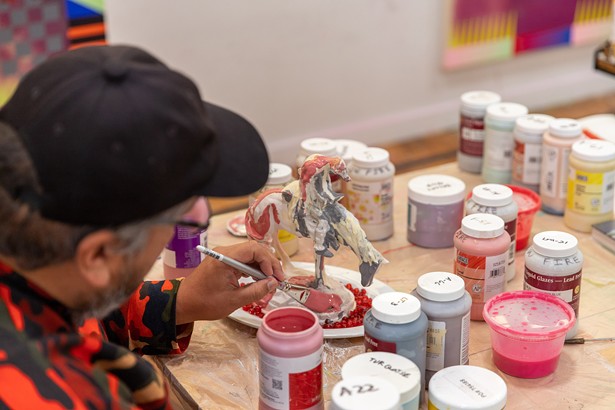 Previous post 5 ways to get more value for your home