In an evening sale dedicated to modern and contemporary art held by Phillips in Hong Kong on Tuesday that brought in $ 27 million, Lucy Bull, Trey Abdella and Ayako Rokkaku were among the few select artists who grabbed attention when their works have exceeded expectations.

As always, works by young contemporary artists, who are known to be attracted to speculative art buyers, remained in high demand during the Phillips sale in Hong Kong. Other works by established names such as George Condo, Lee Ufan and Pierre Soulages were among the best-selling of the evening, priced in excess of $ 1 million.

But Bull and Abdella were among the few young artists who debuted at auction in Asia this week. Entries like these in Hong Kong sales typically draw attention among bidders. In a statement after the sale, Hong Kong specialist Phillips Isaure de Viel Castel, said the house he aimed to put the spotlight on the artists of a “new generation”, whom he described as “ultra-contemporary”. 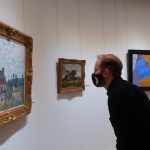 Lucy Bull’s painting 8:50, a vibrant abstraction performed on an elongated horizontal canvas, set a new record for the 32-year-old artist whose works have been compared to those of Max Ernst and Howard Hodgkin. Sold by an Asian collector, it went for HK $ 11.4 million ($ 1.5 million), more than seven times its maximum estimate of HK $ 1.5 million ($ 192,000).

The sale follows Bull’s hit show at David Kordansky in 2021, in the wake of other solo presentations in Arles and Los Angeles that saw his large-scale canvases grabbing the attention of collectors. It only entered the auction circuit last month, when Sotheby’s sold its 2019 abstraction Special guest for $ 907,200, where he sold his estimated $ 60,000 for 15 times.

Along with Bull, a 2019 painting by Trey Abdella set a new record. During the sale, Some things aren’t worth waiting for (2019), which shows a bald cartoon figure digging its eyes against a blurry office scene, which sold for HK $ 2.6 million ($ 337,100). The fundamental price comes before Abdella’s first institutional solo exhibition at the X Museum in Beijing, scheduled for 2022. It was the subject of his first solo exhibition at the Berlin branch of the König gallery in 2020 and another in the outpost of Seoul the following year.

Like Bull and Abdella, by the Japanese artist Ayako Rokkaku Without title (2019) took a similar course. Done in shades of pink with a finger painting technique, one of Rokkaku’s barely visible Kawaii-inspired teen girls appears in the canvas that the artist repeats through her work. The painting sold for 8.1 million Hong Kong dollars (1 million dollars), nearly four times Phillips’ low estimate, riding the momentum gained from its display case at the Jan van der Togt Museum in the Netherlands. year in which it was performed.