A collection of newspaper articles from across the country documents decades of collective outrage against those who deface public property. Heavy punishments, including prison, were passed down to these renegade artists, even those who, unlike Cornbread, did not write on living, breathing canvases.

Alan Ket (born Alain Mariduena) and Allison Freidin founded the museum in 2019. They wanted to tell the story of modern graffiti, an art movement that blossomed in New York’s black and Latin American neighborhoods in the 1960s, and document its expansion into a global art revolution that has taken root in hip-hop and pop culture and now proliferates in advertising, fashion and design.

Like traditional museums that carefully preserve and safeguard art in climate-controlled galleries, the Graffiti Museum’s goal is to preserve and curate an art form that is inherently ephemeral by nature.

When it comes to the “artists or vandals” question, Ket is naturally in the “artists” field. Unsurprisingly, the 51-year-old spent much of his youth spray painting bright, gaudy images on subway trains in 1980s Brooklyn, proud to have a hand in “the most beautiful and exciting art movement of my life.”

Having cut his teeth tagging trains in New York in the 1980s, Alan Ket is co-founder of the Miami Museum of Graffiti. Courtesy of Wesley KH Teo 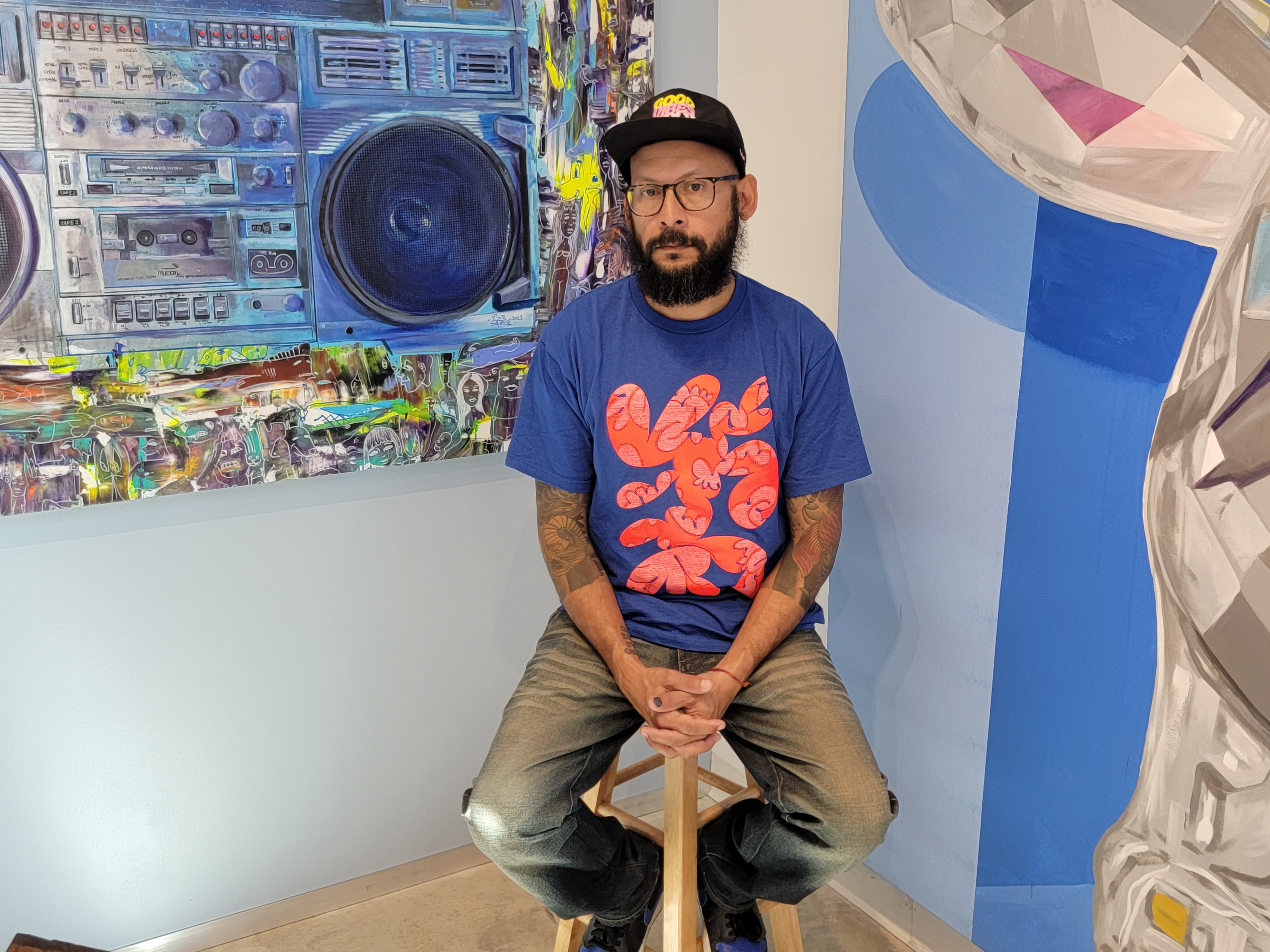 Having cut his teeth tagging trains in New York in the 1980s, Alan Ket is co-founder of the Miami Museum of Graffiti. Courtesy of Wesley KH Teo

Graffiti writers of that era got a thrill in creating mobile art that would travel across New York’s five boroughs.

The act of illegally painting one’s name on public property is a way for marginalized youth to literally make their mark on a city, says Ket.

“It comes from the urge to be recognized, to be heard, to be someone in a big city, to be important for a while,” Ket said. This was especially true in a pre-social media world.

The museum space is dedicated to the tradition of painting subways and freight trains. A series of photos, many taken by journalists, chronicle the range of styles and topics that appeared on trains in cities around the world from the 1970s to the early 2000s.

New York’s clean train policy of the 1980s removed graffiti-covered trains from service. In 1989, the days of admiring your “burner” (a large and elaborate piece) as it whizzed around the city were a thing of the past.

The museum provides visitors with the tools and vocabulary to understand the rise of graffiti as an art form.

The multiple letter styles of graffiti are explained and how they have evolved. The earliest graffiti letters were written in conventional fonts, but over time writers took artistic liberties, creating embellished and distorted fonts that were sometimes barely legible.

No comment on graffiti styles would be complete without a mention of Michael Tracy, known as Tracy 168. He pioneered the wild style, a form of highly stylized intertwined letters. He also introduced cartoon characters to his colorful and chaotic pieces.

The “Global Tags” exhibit at the Museum of Graffiti in Miami features a map made up of spray can caps. Courtesy of Wesley KH Teo 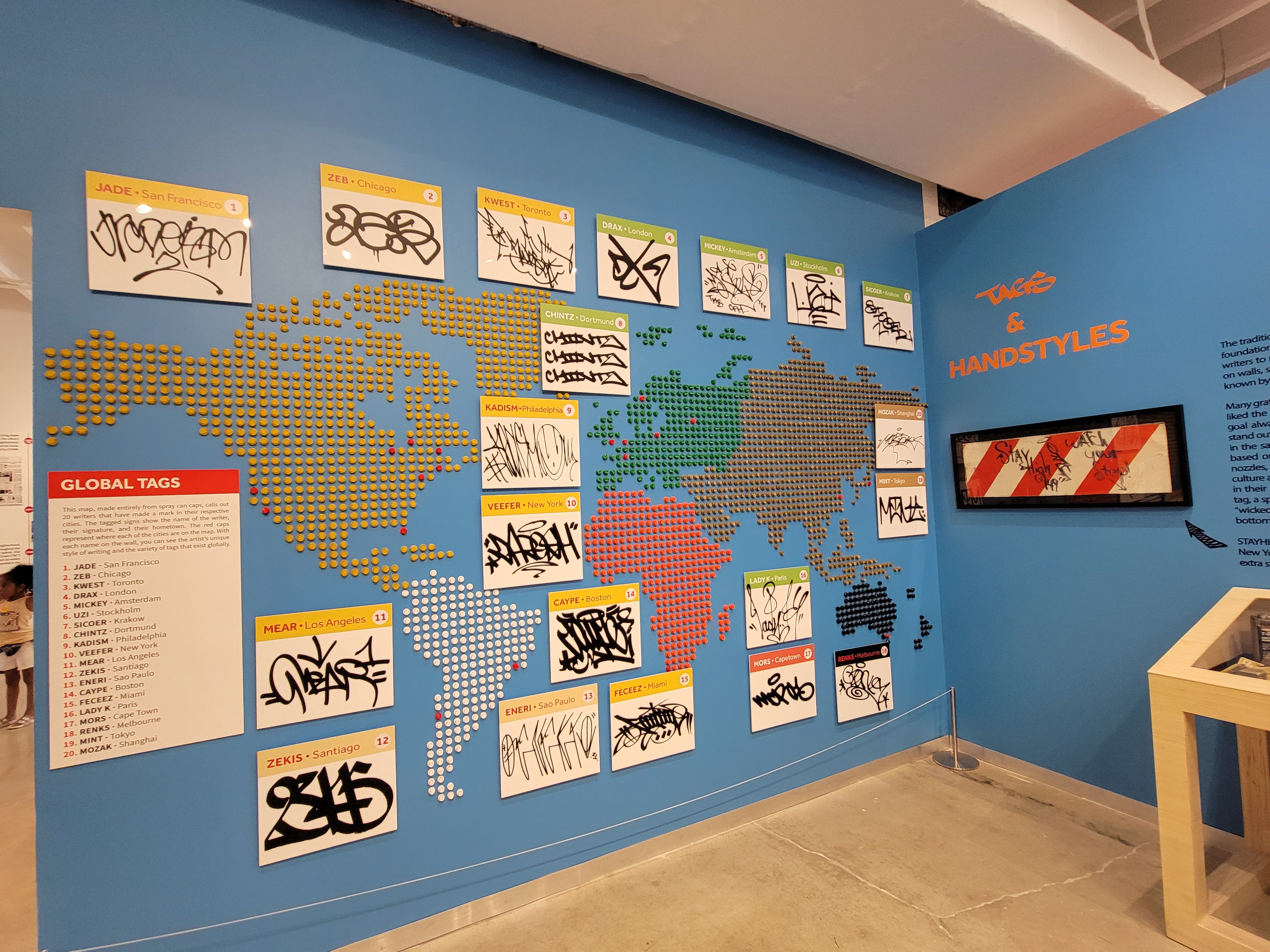 The “Global Tags” exhibit at the Museum of Graffiti in Miami features a map made up of spray can caps. Courtesy of Wesley KH Teo

“Global Tags”, an exhibition featuring a map made of spray can caps, highlights the unique signatures of prolific graffiti writers from around the world, including the legendary Uzi, who makes himself known on the streets of Stockholm.

The “Wide World of Graffiti” exhibit features Lady Pink (Sandra Fabara), known as the First Lady of Graffiti. The rebellious teenager broke into the boys’ club in 1979, leaving a colorful trail across New York City.

Fast forward over 40 years and went from subway train to blockchain. A screen displays its NFT (non-fungible token), a collectible and unique digital asset bearing a serial number stored on the blockchain to prove ownership. NFTs are particularly useful for graffiti writers due to the impermanence of their art.

Lady Pink’s NFT is based on a mural she painted outside the museum in 2020 to celebrate young activists fighting for fairer immigration policy, gender equality and justice for the LGBTQ community. The mural has disappeared, but is digitally preserved. On the screen, a black woman with fluttering butterfly wings holds a flashlight in one hand and a child in the other.

Young graffiti writers are notoriously disdained of old guard institutions like art schools and museums, but some cross paths. Lady Pink’s work has been exhibited at the Metropolitan Museum of Art in New York and the Groningen Museum of Holland, among other art institutions.

It is proof that today’s graffiti “vandals” could be the respected artists of the future.

A short walk from the Museum of Graffiti is Wynwood Walls, an open-air street art museum. Founded in 2009, the art is constantly evolving, so it never gets old, not even for the locals.

On a recent visit, a giant Dalai Lama painted in red and white peers enigmatically through square glasses. At the other end of the vast mural, the civil rights leader, Reverend Martin Luther King Jr., looks thoughtful and determined. Between these two advocates of social justice is a smiling man with a less recognizable cowboy hat: the late Tony Goldman, artist and founder of Wynwood Walls.

Shepard Fairey’s mural pays homage to the visionary developer who transformed a warehouse district into an urban neighborhood in a celebration of street art that incorporates the artist’s recurring themes of oppression and inequality.

Fairey believes that artists have a responsibility to be a “voice for the voiceless”, especially in these turbulent times.

“I always try to use my art to create meaningful conversations,” said Fairey. “This is a time when there isn’t just one conversation to be had.”

In a space where each piece competes for attention, Brazilian artist Eduardo Kobra’s “Etnie” stands out, and not just for its monumental size. Hyper-realistic images of five children from five continents are superimposed on geometric shapes in a kaleidoscope of colors. It conveys the artist’s message that hope for humanity is in the next generation.

As visitors circle around taking Instagram-worthy photos, one thing becomes clear. Traditional attitudes towards street art have changed. The writing is on the wall.

Gala. Hidden inside the Hilton Aventura Miami hotel, this restaurant offers South American flavors that can be enjoyed indoors or on the patio. Appetizers $ 21- $ 42. 2885 NE 191st St., Aventura, Florida. 305-466-7775, www.HiltonAventuraMiami.com