With food and gas prices rising in Japan, Bank of Japan Director Haruhiko Kuroda made the controversial statement (later retracted) that “households are becoming more tolerant of higher prices.” However, a study by a private research firm found that the burden on low-income households of recent inflation is equivalent to a 3% rise in consumption taxes.

Research firm Mizuho Research and Technologies estimated the impact of rising food and energy prices on various income brackets in Japan, based on the assumption that crude oil prices will be around $108 per barrel and the exchange rate will be around ¥135 to the US. dollar. In addition, the study predicted that the core consumer price index (excluding volatile fresh food) would continue to rise by around 2% year-on-year.

Household costs are expected to rise by an average of ¥65,000 per household in 2022, even if the government extends drastic easing measures such as subsidies to keep energy prices below a certain level beyond September, according to the forecast. A breakdown by income bracket shows that the increase would be an additional 0.6% for households with an annual income of more than ¥10 million, while an additional 2.2% would be burdened for low-income households with an annual income. Less than ¥3 million, roughly equivalent to the effect of a 3% increase in consumption tax.

Although there is some gap between these figures, a 2.2% increase is roughly equivalent to a 2.4% increase in the burden on households in the same income bracket that would result from raising the consumption tax by 3% (taking into account exempt items from the tax).

The increased burden of fuel/fuel rises from the income bracket

Compiled by Mizuho Research and Technologies based on a household survey conducted by the Ministry of Internal Affairs and Communications. Heavy fuel subsidies are predicted to continue till the end of 2022. The percentage of burden is proportional to the annual income.

Mizuho Research and Technologies found that consumer perception of price hikes will increase rapidly in 2022, based on a consumer sentiment quantification, focusing on a lifestyle awareness survey conducted by the Bank of Japan. Meanwhile, nominal wages have remained flat, so the gap between wages and prices has widened significantly. 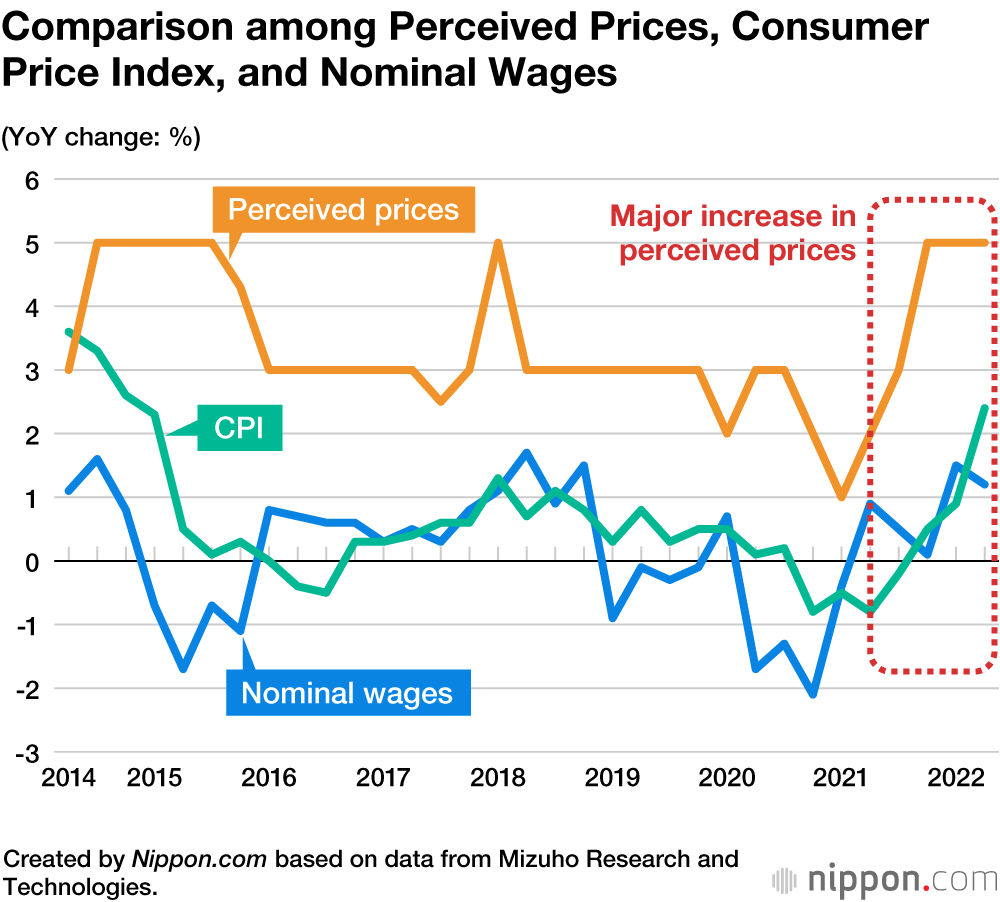 Sakai Saisuke, chief economist at Mizuho Research and Technologies, noted the following: “Increased household savings due to lower consumption during the pandemic seem to provide a buffer against rising prices, but this is the case for higher incomes. houses. Service sector workers have seen their incomes plummet during the COVID-19 pandemic, making it difficult for them to build assets. Pensioners with insufficient savings have to rely on their pension benefits for income, so higher prices for daily necessities such as food have a major impact on their budgets.