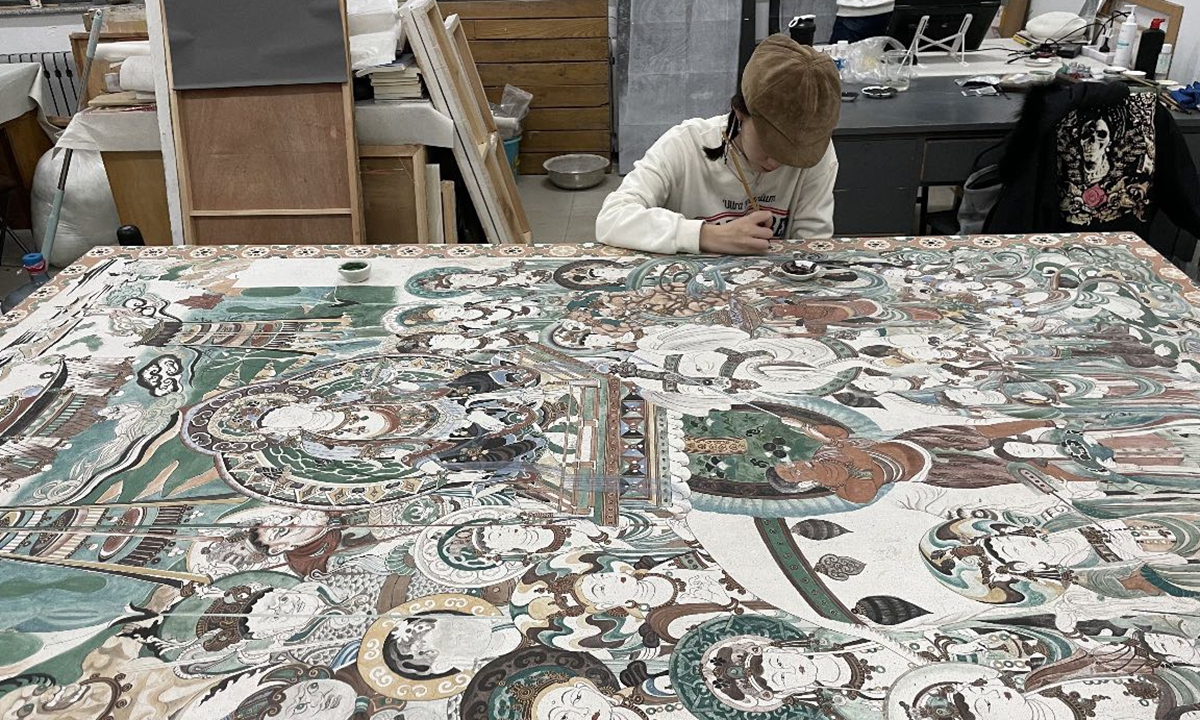 Containing 735 caves filled with Buddhist art, the Mogao Caves attract more than 1 million visitors annually in Dunhuang, Gansu Province in northwest China. Among the many beautiful works of art in these caves nestled in the eastern cliffs of the Mingsha Mountains, the numerous paintings on the cave walls have captured the imagination of people all over the world. Considering this allure, it’s no surprise that a group of young artists recently went viral by turning these large murals into portable works of art.

Qin Yueyu, a Gen Z postgraduate student specializing in art restoration from East China’s Shandong Province, recently made a name for herself after posting her undergraduate work on Chinese social media. The work faithfully recreates the famous classical fresco of the Tang dynasty (618-907) The story of Samantabhadra in Dunhuang.

“To recreate this fresco, we had to create a base layer of mud on a wooden plank to mimic the texture of the cave walls,” Qin told the Global Times.

“Looking at the damaged murals inside the caves, we saw that the mixture of mud and plant fibers created a rich visual texture, so on the drawing board we used materials such as wheat straw and grass fibers.” 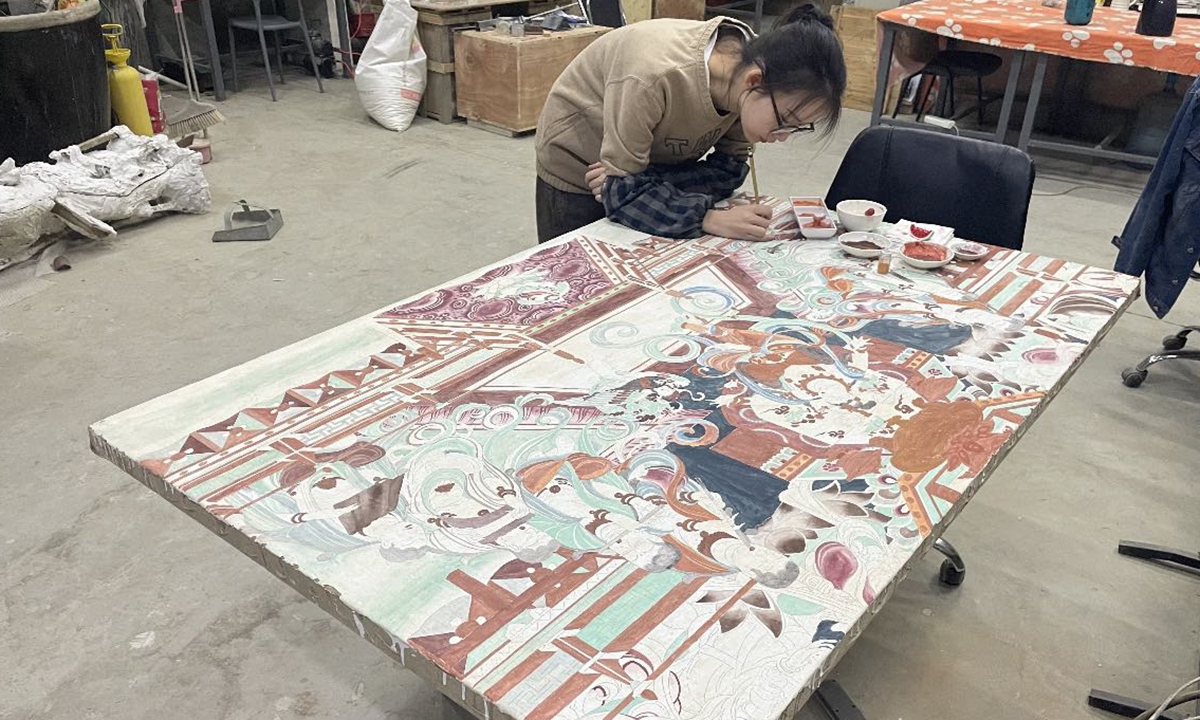 In the painting, the bodhisattva Samantabhadra sits on the back of a white elephant while other servant deities surround her. In the background is Mount Emei in Sichuan province and the mountain can be scattered with waterfalls, temples and pavilions along the landscape.

“The figure of Samantabhadra on a white elephant is an ethnic symbol. Some of the figures within the painting also wear special face makeup which is the origin worn in traditional Chinese opera,” added Qin, who spent six months to recreate the painting.

“Traditional frescoes are fixed on cave walls or temples, but we used the knowledge we learned in our graduate course to turn the fresco into a portable work or art. I intend to continue on this path,” said Qin .

Filling in the blanks

Unlike the landscape watercolor paintings which are commonly considered to represent Chinese paintings during the Ming (1368-1644) and Qing (1644-1911) dynasties, this art form from India, with its Buddhist background and bold colors, has brought a different style to Chinese art that could be enjoyed by later generations.

The Mogao Caves are the heart of what are known as Dunhuang Studios. For Dunhuang scholars, the role of these Dunhuang frescoes in Chinese art history, with their strong colors, dense lines and complex and rich content, not only fills an empty space for pre-Tang Dynasty paintings, but it also rewrites the history of Chinese art, showing that China was not limited to watercolors or ink paintings, but also had paintings with a rich religious background.

“The Dunhuang frescoes show an integration of the pictorial aesthetics of China and the western regions, as they were originally inspired by the Buddhist beliefs of the culture of the western regions. This made the aesthetics – the character formation, the applied colors and the visual presentation – very different from the original paintings of China, “Guan Linhui, an art expert who specializes in Xizang Thangka paintings, told the Global Times.

“When it comes to the subject, traditional Chinese paintings often use delicate or freehand strokes to represent people in everyday life. But due to the spiritual nature of the Buddhist faith, Dunhuang’s paintings, especially those depicting spiritual figures, have more liberal traits, more dense and pure colors such as blacks, reds and greens that emphasize the colorful nature of the painting. This for me is a way to express their different imaginations, “said Guan.

With advances in digitization technology, the conservation of artwork in caves has achieved some important milestones. In addition to helping research forward, these digitization efforts are also being used to allow more people to access the caves online, thereby increasing their popularity, especially among young people.

Dunhuang Academy data in 2018 shows that the number of tourists to the caves has increased by an average of 23% per year in recent years, among which most of the visitors were as young as students.

“But if young people have only a little understanding of Buddhist culture, they will not be able to appreciate the Dunhuang culture, instead they will only see dazzling images in front of them,” explained Du Juan, Deputy Director of the Dunhuang Academy.

To educate more young people about the Dunhuang culture, the Dunhuang Academy in 2014 decided to bring the caves online through a digitization project. To this end, they formed a young Dunhuang research group to take full responsibility for presenting the interior of the caves.

From data collection to post-production, including adding audio explanations, image visualizations and small videos, it can take several years to digitize the caves.

For people like Qin, they feel the responsibility and obligation to reinterpret ancient culture such as that found in the caves.

“By using the new media platforms to rejuvenate ancient culture, more people can learn about the beauty of this glorious Chinese art hidden deep in the mountains that has been dormant for a long time,” added Qin.