Dogecoin price saw a huge bounce last week but recently pulled back due to market conditions. Since then, DOGE has been trying to find a stable footing for the next leg-up. On the other side of the ecosystem, Grayscale, a popular institutional investment company and digital currency asset manager, has filed a lawsuit against the Securities and Exchange Commission (SEC) for refusing to convert the Grayscale Bitcoin Trust into a spot Bitcoin ETF.

Grayscale puts the SEC on the stand

As of June 30, Grayscale’s CEO Michael Sonnenschein announced that he was suing the SEC for denying Bitcoin ETF applications. The development comes after regulators denied the company’s application to convert its trust into a spot bitcoin ETF.

Additionally, the SEC has pushed back multiple ETF filings over the past few years, citing concerns such as market manipulation, lack of liquidity, and the like.

As a result, Grayscale sued the SEC with the US Court of Appeals in Washington DC to review the SEC’s order. The suit alleges that regulators violated the Administrative Procedure Act and the Securities Exchange Act.

In a recent announcement, Grayscale stated,

We believe in the SEC’s mandate to protect investors, maintain fair, orderly and efficient markets, and facilitate capital formation – and we are deeply disappointed and strongly disagree with the SEC’s decision to prevent entry into the US market.

Despite this move by the crypto company, the market reaction remained muted. Bitcoin price is still hovering aimlessly at the $20,000 psychological level. Dogecoin price, however, is showing signs that it wants to move higher.

The price of Dogecoin signals its purpose

Dogecoin price rallied roughly 60% between June 19 and June 26 and set a swing high at $0.078, just below the higher time-frame resistance barrier at $0.082. This massive rally faced exhaustion before retesting a critical hurdle, leading to an 18% retracement.

The correction was supported by the 8-day exponential moving average (EMA). DOGE is currently trading above the 8-day EMA at $0.067 and the 34-day EMA at $0.072. As the meme coin spirals, the likelihood of a volatile move seems high.

If the breakout feels favorable for the bulls, Dogecoin price may rally 20% to retest the $0.082 hurdle. The upside could be closed here, but a resurgence of buying pressure turning this level into a support floor suggests the bulls want more.

In this case, DOGE could travel another 34% to retest the $0.109 ceiling. This run-up, in total, constitutes a 60% gain and the price of Dogecoin has topped locally. 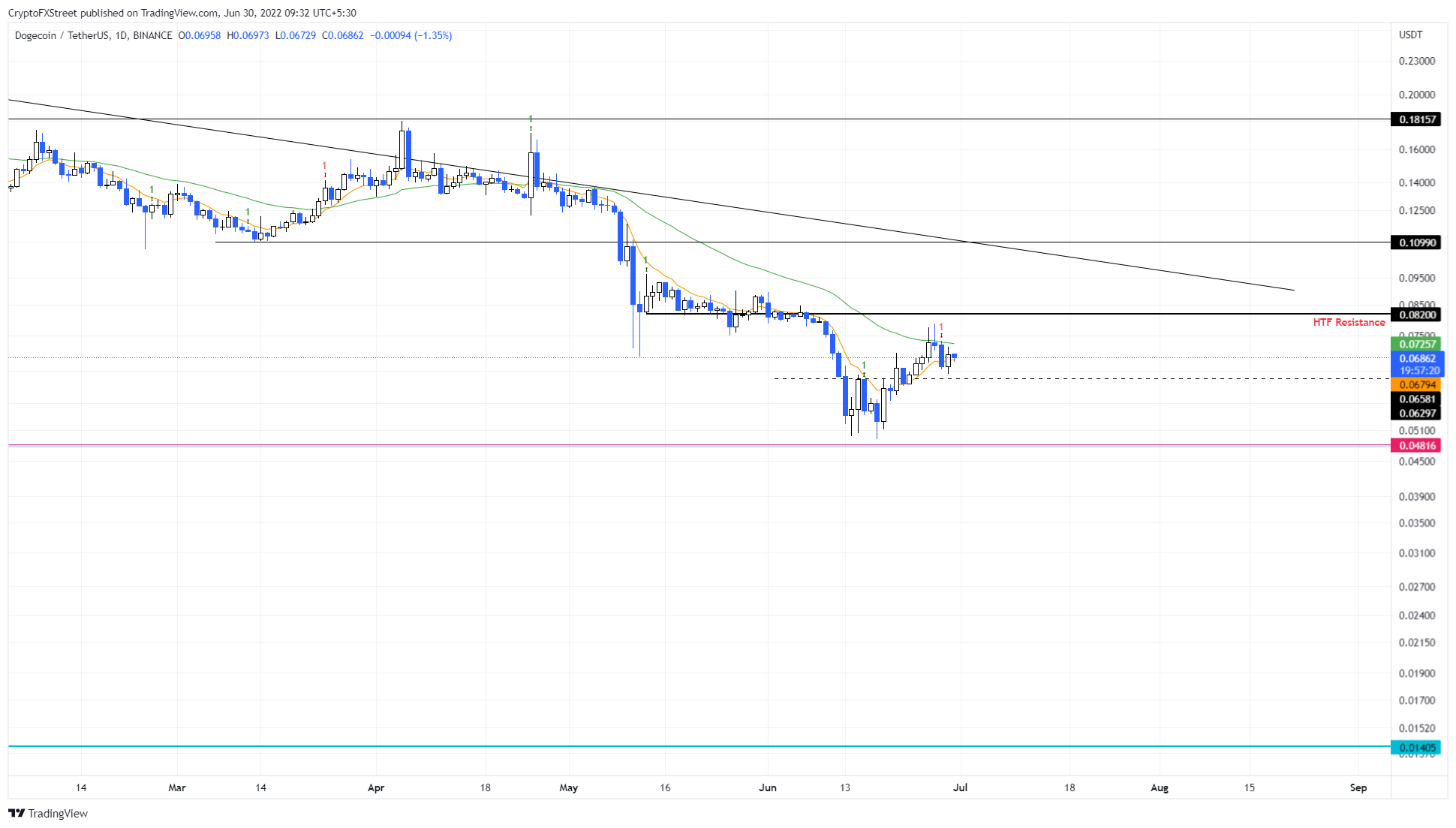 On the other hand, if Dogecoin price produces a daily candlestick below $0.048, it will create a lower low and invalidate the bullish thesis for DOGE. This scenario could further evolve into sellers taking control and crashing Meme Coin by 70% to $0.014.